Covid Dashboard - Article 6 - Creating a group for a slicer

- April 28, 2020
I will continue to build on my earlier posts about my COVID19 Dashboard.  In this series, I have written a few different blog articles describing not only how I built it, but some things I learned in the process.
The current list of topics include:
Today I am going to look at a question one person asked me.  When they were using the dashboard, they wanted to be able to filter the global results by countries of similar size.

After thinking about this for a while, I decided on the following approach.  There are probably different approaches that can be used, and that is one of the things I really like about Power BI.  In this case, I tried to take a very simple approach.

Step 1 - I had to decide how I wanted to group the countries.

I took a look at the data, and decided it would be best to group the countries together in five groups.
Step 2 - Add a new column to the country population table.

I decided to use a conditional column to add the group for each country in the population table.

This is simply a combined if - then - else formula.  I started with the largest option first and worked down to the smallest option.

Step 3 - Add a slicer to the report

Once this column was created, I simply added it to the report as a slicer. 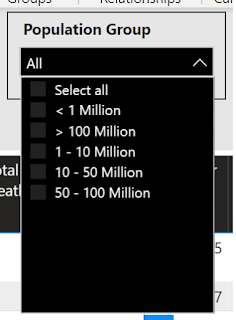 You will notice the drop down list for the slicer is not in the correct order.  I would like to have the largest group "> 100 Million" listed last.  This is because the field is sorted alphabetically and numerically, the symbols come before the numbers.

In order to fix the sorting of the slicer, I created another column where I replaced the text names of the groups with numbers. 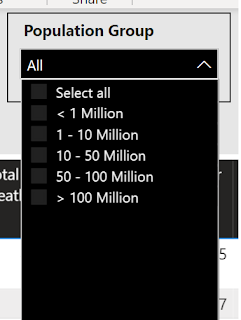 With these two columns, I was able to quickly provide the additional information the user was looking for in a very easy, straightforward approach.

If you have any questions about my Covid 19 dashboard or about other Power BI topics, please do not hesitate to leave a comment.

Popular posts from this blog

There are many different articles available on Time Intelligence in Power BI.   Many new users to Power BI do not really understand the importance of having a date table in their data model.   I have spoken on this topic on many different occasions and continue to receive a lot of questions about the topic.   In this article I am going to try and cover a few tips on how to work with dates in your Power BI model. Many new users simply use the Auto Date & Time function of Power BI.   This function automatically creates a hidden date table for each field in the model with a date or date/time data type.   This function is enabled by default and it allows for slicing by Year, Quarter, Month and Day.   The problem with Auto Date and Time is that it only works with a standard calendar (Jan to Dec).   It requires a datetime column in the fact table.   It does not work with multiple fact tables and it does not support time intelligence calculations (YTD, MTD, etc.).   So there must be
Read more

Showing the last 12 months based on a date slicer

When working with financial and sales data, clients often ask for charts showing the last 12 months of data.  This is actually very simple using relative date filtering. In addition, they might ask to compare to the same month last year.  With a simple DAX calculation (SAMEPERIODLASTYEAR) it is possible to add this measure. Here is the formula: Same Month Last Year = CALCULATE(Sum(Sales[SalesAmount]),SAMEPERIODLASTYEAR('Date'[Datekey])) For many users this is all they need.  The chart will update each month and they will always be able to see the last 12 months.   However, this chart will not work with date slicers.   If the client adds a date slicer to the page and selects just one month, the chart will be limited to one month. The reason the chart is limited to one month is because the date dimension relates to the sales fact table and it filters the data for the selected month. However, this is not what
Read more 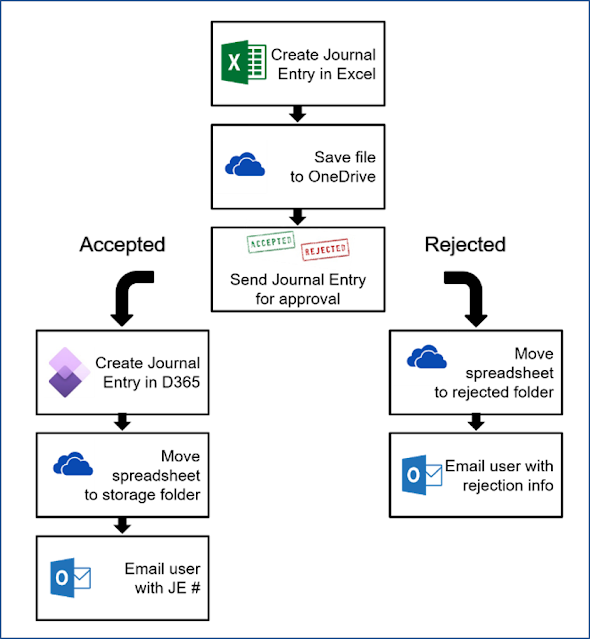 Have you ever wanted to just create your Dynamics 365 Finance journal entries in Excel, without dealing with the Excel Add In.  This blog article will show you have using Excel, OneDrive and Power Automate. Typically I put all the steps right in the article, but this is a pretty detailed process, so I have included the link to a document I prepared, or you can simply watch the video below. Download the detail directions here
Read more